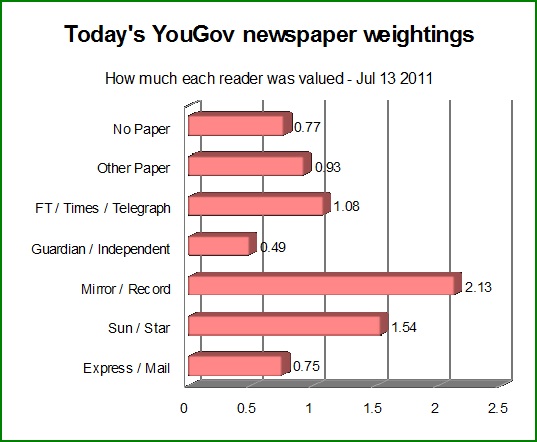 Why are the views of Mirror readers magnified?

Overnight we had the usual YouGov daily poll for News International and this showed Labour, on 43%, with an 8 point lead over the Tories with the Lib Dems on 10%.

Over the past thirteen months YouGov has consistently been reporting higher Labour shares than the other firms which generally have the gap between the two main parties much closer. Thus in all but one YouGov poll since December the red team has been in the 40s. During the same period ICM has not had the party out of the 30s.

One factor, I believe, is YouGov’s use of newspaper weightings.Â The chart above shows how much value is put on each response in the latest poll based on respondents’ newspaper segments. A target number is established and if there are too many in one group their views are scaled down while the reverse occurs if not enough people in the sample meet the target for a particular segment.

The pattern featured is very similar to that which we see almost every day. At one extreme too many Guardian/Indy readers take part and their views have to be scaled back. The reverse happens with the red-tops, notably the Mirror/Record, and the views of those who do participate have to be scaled up.

The overall impact is that in this latest poll the value of a Mirror/Record reader is 4.13 times that of a Guardian/Indy one.

This shouldn’t matter too much if the views of participants broadly reflect those in the segment. But the larger the uplift the increased risk of distortion.