Mark Gill puts it in an international perspective

The phone hacking scandal is unlikely to make a huge difference to the publicâ€™s view of the press. The chart below shows the proportion of people who â€œtend not toâ€ trust the press, from across a range of European countries. This survey was conducted in November 2010 and clearly shows that well before the present media scandal, the UK public stood out for being by far the most sceptical about their newspapers. 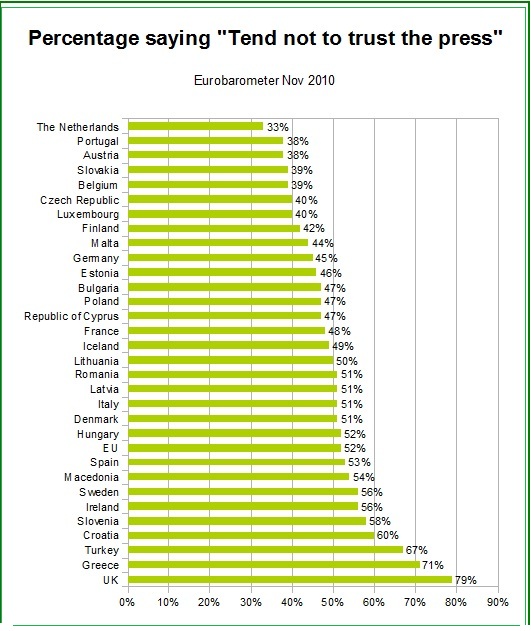 With 79% of the UK public who â€œtend not to trustâ€ the press and just 18% who â€œtend to trustâ€ them, thereâ€™s not much further for the reputation of the newspaper media to fall. On this measure, only the Greek public comes close to the UK for media scepticism. In many ways, the British publicâ€™s reaction to the newspaper hacking allegations feels similar to its reaction to the MPsâ€™ expenses scandal. Lost of shock and anger, but for the most part rather than changing many peopleâ€™s opinions, it reinforced their prior perception that most politicians are â€œin it for themselvesâ€.

But will the scandal impact on the British publicâ€™s trust in the media more generally? The UK public is as trusting of television (51% tend to trust it) and radio (55%) as the average European. And we much more favourable towards these two media than of the press.

Perhaps it is the reputation of the police that will take the greatest hit? 71% of the UK public â€œtend to trustâ€ the police â€“ significantly higher than the 64% European average. This has the potential to fall a long way if the corruption in the police is proven to be widespread and not isolated to just a few officers.