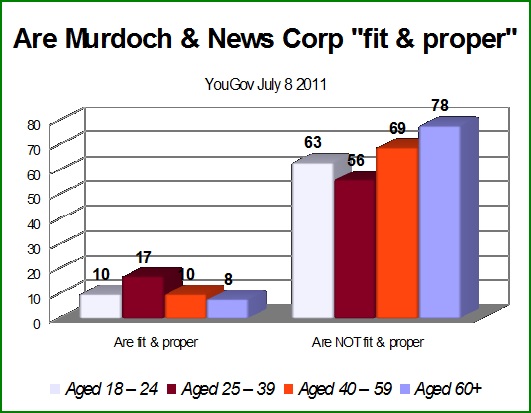 Why are oldies much more severe about hacking?

As has been observed many times here before the older voters are the more likely Â it is that they are on the electoral register and to vote. Also they are much more likely than the electorate as a whole to support the Conservatives.

If only the oldies had been allowed to vote Cameron would have won with a landslide so what they think matters.

The above chart shows the age break-down to one of the main questions in the weekend hacking scandal polling from YouGov.

This was to the question of “…of whether Rupert Murdoch and other News Corporation executives are fit and proper to own British media”.

As can be seen the oldest age segment is taking a much tougher view than the rest. Thus the 60+ group split 78-8 against Murdoch. That compares with 56-17 split amongst the 25-39 year olds.

I’ve featured the splits to just one of the questions but the pattern appears right through the poll. The oldies are much more critical than the sample as a whole.

This is just one pollster and I’ll be looking carefully at other surveys in the next week or so to see if they are also finding the same trend.