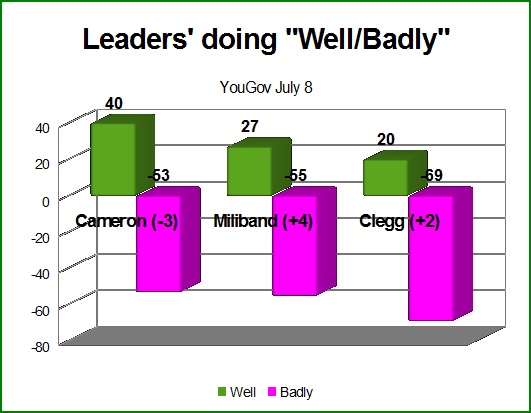 The YouGov weekly leader ratings are out and show that EdM is making a little bit of progress in recovering his position against Cameron. As the chart shows his net negative has been reduced by 4 while Cameron’s has increased by 3.

Clegg’s figures remain in the doldrums though he does see a slight improvement.

I regard leader ratings as the best guide and are superior to voting intention numbers.

For me the best leader polling is from Ipsos-MORI which has been asking the same question in the same format for nearly a third of a century. Instead of YouGov’s “doing well/badly” MORI ask whether respondees are “Satisfied or dis-satisfied”. MORI comes out monthly and the next poll should be in the third week on July.

The fieldwork for today’s poll took place on Thursday and Friday.