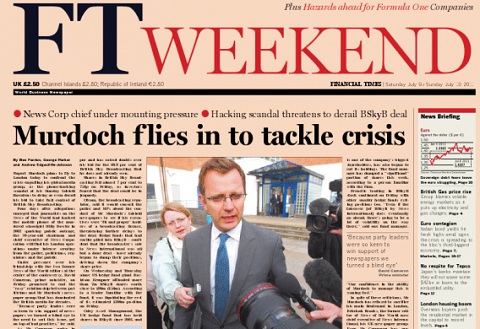 Where do the developments so far leave the key players?

The phone-hacking scandal has produced a bad week for many people. Some have been arrested, some tainted by association, some have lost their job, some have had their judgement questioned. A newspaper of 168 years standing has been closed. Others no doubt wait nervously. Itâ€™s big and dramatic news – perhaps too much so.

Retaining a sense of proportion at times like this is crucial and difficult, not least because there are various different strands to this, of differing levels of importance and interest, and reported on by people who frequently have an interest in the outcome of the story – in all senses of the phrase – well beyond that which theyâ€™d take if it didnâ€™t involve journalism at the centre of the scandal.

At the centre of those interests lie News Corpâ€™s bid to take over BSkyB, in which it already has a substantial stake. The process for that bid has already been lengthened and the decision may well be put back further, while other investigations are concluded. The grand gesture to close the NotW has to be seen in that context. Yes, damage had been done to its reputation but with determination it could have been saved, especially with the worst excesses behind it, assuming thereâ€™s not more to come of a more recent vintage. Advertisers will return if there are readers reading.

Where responsibility does still lie is with the individuals who either were aware of what was going on or should have been, in particular, Coulson and Brooks. The initial decision, now rescinded, to appoint Brooks to oversee News Internationalâ€™s internal inquiry was an extraordinary one.

In order for Cameron to sustain damage, he has to be linked in the public mind with Coulsonâ€™s wrongdoings, even though the evidence for which is only coming out to the full extent and that he left No 10 some months ago.

I wrote two years ago that it would have been sensible for Coulson to go before the election because of the risks the hacking scandal presented and events do seem to have borne that out.

Even so, Miliband cannot make too much of the â€˜judgementâ€™ issue. After all, just about every ground for criticism that could be made for Cameron appointing Coulson could be made more intensely for Miliband appointing Phil Woolas to his front bench as Shadow Immigration Spokesman. Should he continue down that path, charges of opportunism and rank hypocrisy will become easy to level. His comments towards News International are unlikely to have won him many friends there and assuming that NI make it through largely unscathed, their likely future attitude towards him is something that will need factoring into expectations. The way Kinnock was treated in the 80s may give some indication of whatâ€™s to come.

What we do know is that the Murdochs have acted ruthlessly this week, that the BSkyB bid is on hold and that a damage-limitation and distraction process has taken place. We can reasonably expect more of the same but crucially, that means itâ€™s likely to stay a story where journalists are at the core. The extent to which politicians are damaged will depend more on the nimbleness of their footwork and basic political skills than their past associations.