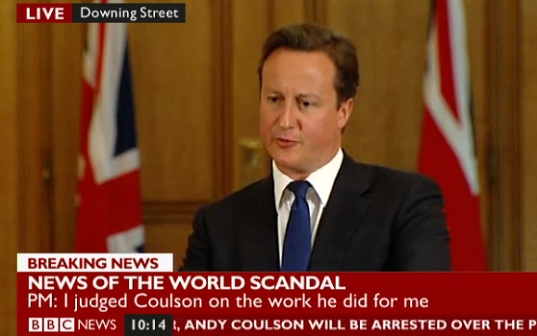 Where Does Re-toxification Leave the PM?

It must hurt for the Prime Minister. No politician wants to be out of step with the electorate or at odds with the public mood, especially when it risks turning into rage. David Cameron, the first public relations professional to lead a developed nation, will be more sensitive than most.

Allegations of press phone-hacking into the voicemail of murdered children, terrorist victims and fallen servicemen and women cuts through to the public and has put News International at odds with British decency. Cameron has voiced his disgust, but his inability to distance himself from Andy Coulson, unwillingness to call for Rebekah Brooks to go means he is no longer fully in charge of events.

The decision by Murdoch to close the News of the World again shows how fluid the situation is.

Unless there is a clear and credible government position on the BSkyB takeover which takes into the full extent of public feeling then Cameron’s relationship with Brooks and Murdoch will remain a big part of this unsavoury story.

Cameron knows he risks taking a pounding. Much will be written and indeed polled around this in the weeks and months to come – though perhaps not on YouGovâ€™s daily tracker poll commissioned by The Sun. The extent Cameron has gone to please and appease Murdoch, like so many before him, should not be viewed in isolation. The potential scale of damage to Cameron goes beyond this newspaperâ€™s sordid affair and relationships with those in power. In electoral terms we are witnessing the re-toxification of the Conservatives.

The â€˜detoxification strategyâ€™ wasnâ€™t just something instigated by Cameron – it was the very reason why he was elected by the Conservatives in the first place. He seemed so different from Tory leaders of the past. Empathic, optimistic, generous spirited, modern and in-touch. He was not without his critics, but just as there were plenty in Labour who tolerated Tony Blair on the grounds he was ‘a winner’, many Conservatives were prepared to back Cameron so that he could help them â€˜Change to Winâ€™. However the parallel ends there.

Despite Cameronâ€™s style, his rebranding the Conservative Party with a badly drawn tree, identifying with environmental issues, ring-fencing overseas aid, imagining of a â€˜Big Societyâ€™ and fast-tracking ethnic minority and gay parliamentary candidates, Cameron still did not win a majority. He spectacularly squandered an array of political and campaign advantages and was left just 48 seats ahead of Gordon Brownâ€™s Labour. A pitiful result given the circumstances.

This current News International firestorm comes soon after the controversy over Andrew Lansley’s botched health reforms which invoked deep fears the Conservatives were again trying to dismantle and privatise the NHS without a mandate. Lord Ashcroft’s recent studies explore the views of the people which Cameron must win over in order to have a chance of winning a majority at the next election. And one year in, they are still nervous. One â€˜Conservative Considererâ€™ sums it up neatly:

â€œIn the end it was because of the NHS. When I hear the Conservatives are going to reform the NHS it sets alarm bells ringing, because I think â€˜privatisationâ€™”

Ashcroftâ€™s polling conducted in March highlighted how the 3rd biggest reason why this group of individuals were not turning to Cameron, was a sense that the Conservatives were still â€˜for the rich/big businessâ€™. Spin forward four months. You donâ€™t get â€˜bigger businessâ€™ than Murdoch and News International.

If Cameron is seen to drag his feet in ordering a swift public enquiry led by a respected judge, or if he fails to â€˜pauseâ€™ proceedings ahead of Murdochâ€™s imminent takeover of BSkyB, then he risks serious damage to his and his party’s reputations.

As retoxification continues apace, it is now worth examining if the Conservatives can actually win their first parliamentary majority since 1992 at the next election? At some point MPs will begin to wonder this out loud too. If at some point they conclude it is not likely, they could be forgiven for asking ‘what is the point of David Cameron?