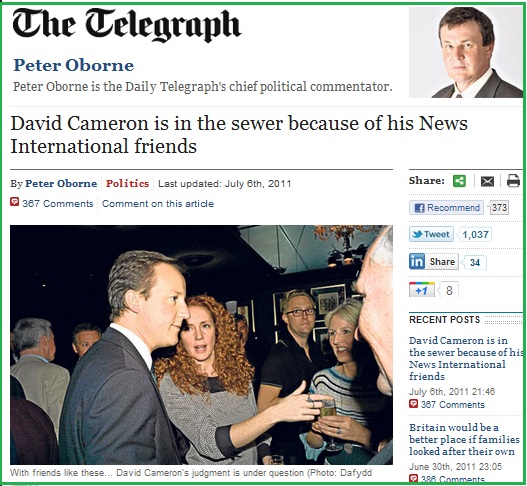 Is the Peter Oborne verdict correct?

Amongst the mass of coverage this morning on the hacking scandal the piece that for me stands out is the one by Peter Oborne in the Daily Telegraph in which he looks at the impact on Cameron from the affair.

Oborne asserts that “.the series of disgusting revelations concerning his friends and associates from Rupert Murdochâ€™s News International has permanently and irrevocably damaged his reputation.”

He goes on:” Until now it has been easy to argue that Mr Cameron was properly grounded with a decent set of values. Unfortunately, it is impossible to make that assertion any longer. He has made not one, but a long succession of chronic personal misjudgments.

He should never have employed Andy Coulson, the News of the World editor, as his director of communications. He should never have cultivated Rupert Murdoch. And â€“ the worst mistake of all â€“ he should never have allowed himself to become a close friend of Rebekah Brooks, the chief executive of the media giant News International, whose departure from that company in shame and disgrace can only be a matter of time.

We are talking about a pattern of behaviour here. Indeed, it might be better described as a course of action. Mr Cameron allowed himself to be drawn into a social coterie in which no respectable person, let alone a British prime minister, should be seen dead…”

He suggests that if the Prime Minister plays his cards wrong, his public image will change in a matter of a few days.

As ever Oborne’s article is powerful, insightful and entertaining but is it too early to draw conclusions on the scale of the damage? The critical thing for the PM, surely, is how he moves on from here and we’ve only just seen the first phase of his response.

The big electoral issue, of course, is that the polling shows that Cameron is more popular than his party. If that starts to change then we could be in a different ball game.