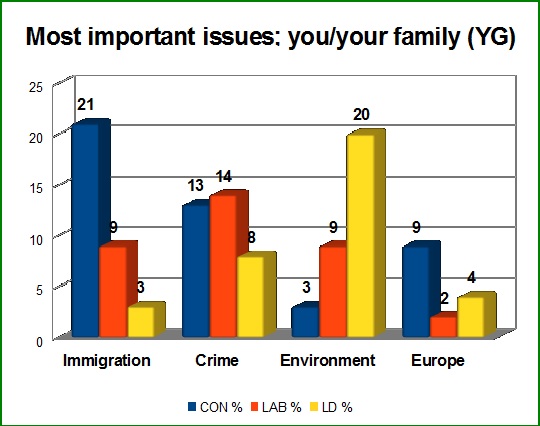 Or are we seeing a core votes strategy?

The chart shows the party splits in today’s YouGov “Issues facing you/your family findings and shows a vast difference in the view of what’s important between supporters of the three parties in four key areas.

The YouGov results are similar to that we have seen from other pollsters and suggest his primary audiences for the rhetoric are those the Tories already have on board.

If the blues are to edge beyond the mid 30s then they need converts and I wonder if adopting a Michael Howard approach is a winning strategy?

That hardly worked in 2005 and I am far from convinced that it will work now. How does going out of your way to appear tough fit with the detoxification strategy

Maybe the Justice Secretary, Ken Clarke, had this right all along?