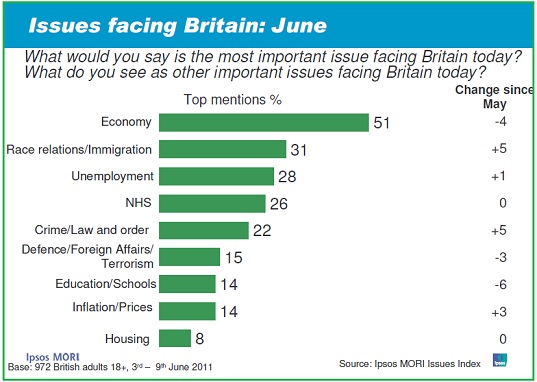 What PB regulars will know is my favourite non-voting intention poll of the month – the Ipsos-MORI issues index – is just out and the big change is that concern about the economy is moved to its lowest position since February 2010 – three months before the general election.

The final poll before last year’s election had the economy on 70% – now it’s just over 50%.

Fieldwork for this poll operates in exactly the same manner as it has done for nearly a third of a century. It’s carried out face to face with interviewees asked, completely unprompted to say what they think is the most import issue facing the country at the moment. Then they are invited to state any number of other issues where they think there is also concern.

This monthly survey is unique and is unlike a lot of non-voting polling where the questioning can be said to be leading. I regard the MORI issues figures as the gold standard.

The pollster’s records go back to the 1970s.

The main outline of the June figures are above with crime and immigration moving up a little bit, the NHS staying the same and the economy going downwards.

As we have seen for several years concern about the EU/Europe is minimal with nobody in the sample saying it was the main issue and just 3% including it in their list of other issues.