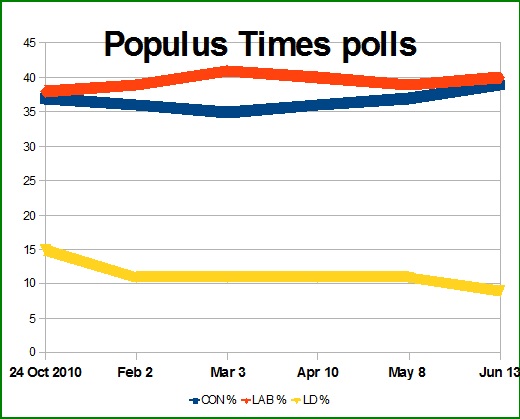 The LDs drop to a new low with the phone pollster

There’s a new Populus phone poll out for the times that has the Tories up 2 to 39, Labour up 1 to 40 with the LDs dropping to a new low with the firm.

In other findings just 23 per cent of voters now say they trust the Labour leader and Shadow Chancellor to run the economy better, a 10 per cent drop since the last time Populus asked the question in March.

Also 80 per cent say the Government is right â€œto target undeserving benefit recipients and to take payments away from those who abuse or cheat the systemâ€.

The party that will be most disappointed with these numbers will be the Lib Dems – for Populus has tended to have them a bit higher than YouGov though a fair bit lower than ICM.