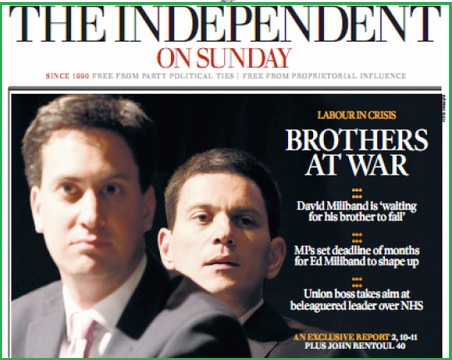 Is it worth 11/4 that he’ll be out before the election?

A lot of focus on Ed Miliband in the Sundays this morning with the Indy on Sunday saying that “friends of David Miliband” are saying that the brother who lost last September’s leadership election is “waiting for his brother Ed to fail” as Labour leader and is “poised” to make another bid for the job.

The report goes on: “.Last night, a friend of David Miliband told The IoS that relations are very poor, and that the MP was still hungry for the top job. David Miliband has turned down offers of several posts under his brother, leaving the impression that he wanted to retreat from frontline politics.

But the friend said: “David definitely wants it still. He is waiting for Ed to fail. He thinks the coalition will go the full term, so Ed has plenty of time to fail.” There is no suggestion of David Miliband’s planning a direct challenge to his brother, but his aides are mobilising in the expectation of his brother losing the party’s support.,,”

It’s the lead story in the Sunday Times as well while the Mail on Sunday starts the serialising of a biography which will only keep the pot boiling.

But how realistic is it that the younger Miliband will step aside and what should punters be doing?

A big problem for Ed is that his future is dominating the media narrative and the coverage has the feel of that which we saw in 2003 before Iain Duncan Smith was booted out of the Tory leadership.

We all know that Labour’s rules make it very difficult to oust a leader though a lot of pressure, as we saw with Tony Blair in 2006/7, can cause one to step down. Could Ed be pressurised in the same way?

A big problem for his detractors is that five times a week we see the YouGov Daily poll which has had Labour in the 40s on all but one occasion since December 2010.

If the News International polling contract was with ICM, which has not had Labour in the 40s at all, then the political scene would look very different.

ICM, it will be recalled, absolutely hammered YouGov in the AV polling race.

The most interesting bet is whether Ed will still be leader at the general election. Ladbrokes have him not being at 2/1; William Hill 9/4 with Victor Chandler

At 2/1 or longer it’s probably worth a punt.