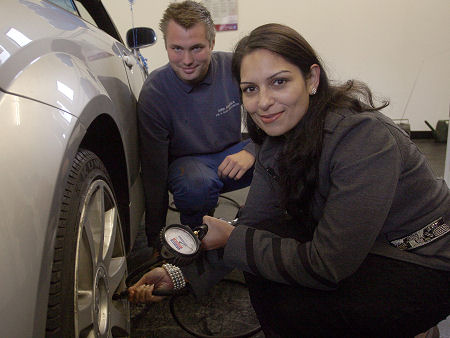 Will Patel be to Thatcher what Cameron is to Heath?

Although Iâ€™m a Labour bloke, two of my best political bets have come on Conservative leadership contests where I am now 2 from 2. I successfully backed Iain Duncan Smith at a whopping 33/1 and David Cameron at very tasty 11/1. I think it is worth me dipping my toe in the market at this early stage following a nagging feeling that Iâ€™ve seen the next Conservative leader.

There is one MP who scares me as a Labour member more than any other. Itâ€™s not Cameron or Osborne, but the newly elected member for Witham. More than any other politician she reminds me of Margaret Thatcher. She has her steeliness, clear ideology and cuts a dashing image.

She gives me nightmares. When Cameron stands down as leader, perhaps in 7 or 8 years time, I’ve a feeling she will be exactly what the Conservative party is looking for.

Suspicions that Cameron would prefer to keep the Lib Dems in his government even in the occasion of a majority at the next election () cement a growing belief I have about him. Like Heath, Cameron wants to govern from the centre rather than take the country on an ideological journey. His mushy Big Society concept is part trying to show that it is no longer a â€˜nasty partyâ€™ but feels wrong for our hard-pressed times.

Cameron is smart enough to go at a time of his own choosing, but the next leader could well a candidate to the right of him who will very obviously serve the interests of the Conservative Party first and foremost.

Priti Patel is fiercely Eurosceptic having previously worked for Sir James Goldsmith. This will increasingly hold her in good stead in a country alarmed at having to bail out other countries while the UK faces severe cuts of its own. Similarly she is a thorn in the side of the trade union movement and repeatedly makes a clear case for further limits to union powers. If the country has sustained industrial action in the coming years over dramatic spending cuts and the opening of public services to private providers, then Patelâ€™s words will resonate with many in her party.

Finally like Thatcher, Patel would be â€˜a firstâ€™. 36 years on from Thatcher the Labour Party has yet to elect a female leader. My betting is that the Conservatives will be the first to elect an ethnic minority leader too. A strong, articulate Asian woman could well be right for her party when David Cameron goes. The worry for my own party is that she may also chime with the country. Itâ€™s a long way away but by gut tells me she more than any other is the one to watch in the years ahead. At the Ladbrokes price of 50/1 she’s well worth a punt.

Henry G Manson is a Labour activist from the North East and contributes a weekly column to PB. Twitter @henrygmanson