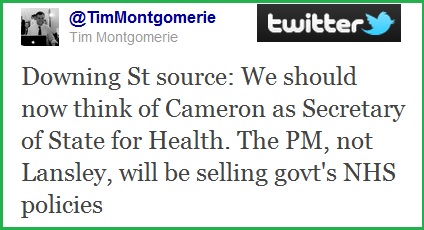 Should it be a great PMQ opportunity for the Labour leader?

There’s just about nothing that leaders’ of the opposition like more than what appears to be a U-turn in government policy, particularly when that has, apparently, been driven by the PM over-ruling, in effect, one of his cabinet.

Today there is PMQs and the NHS changes and the position of Andrew Lansley will surely be part of EdM’s planned line of questioning. On top of that there are the divisions in the coalition as we saw on Newsnight last night with the Lib Dems seeking to big up the changes and the Tories trying to minimise them.

In all of this Labour is in danger of being marginalised – the party is not part of the story. It was interesting that the Newsnight debate was between a Lib Dem and a Tory.

Will Miliband be able to claw some of this back to weave this into a PMQ victory? He certainly needs to given the increasing criticism he is coming under.