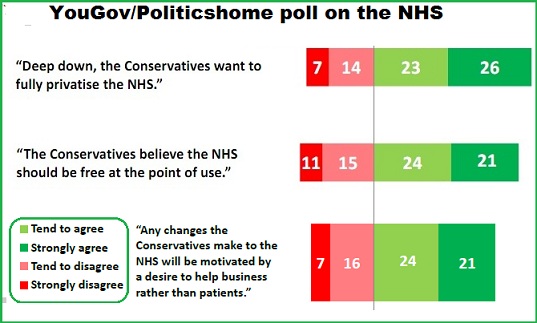 Is that why there’s so much continuing mis-trust?

What strikes me is the gap between the modest overall support for many of the Lansley proposals and the continuing perceptions about the Tory party and the NHS. This is how Gettleson sums it up:-

The key explanation however is around the fact voters still donâ€™t trust the Conservatives on the NHS. The most unpopular idea polled, opposed 7% to 71%, was a full privatisation of the NHS. When respondents were asked whether they thought that â€œdeep down, the Conservatives want to fully privatise the NHSâ€, they agreed 49% to 21%. Although it was felt that the party did at least think the NHS should be free at the point use, 38% to 26% (a further 37% didnâ€™t know or were indifferent)..This points to the failure of David Cameron to truly detoxify his party on healthcare. A large plurality, 45% to 23%, believe that â€œany changes the Conservatives make to the NHS will be motivated by a desire to help business rather than patients.â€ Even 16% of those who recall having voted for the party in 2010 believe this is true.

This is hugely challenging for the Tories because it’s hard to see an easy solution. For decades Labour, and the Lib Dems, have attacked the blues for their lack of commitment to the service and this is now, apparently, deeply rooted. Voters are not going to change their views over-night.

That’s why I always thought is was politically hazardous to push forward with an ambitious reform programme. Opposition on the lines that we’ve seen was almost inevitable.

In retrospect it would have been far better to let the Lib Dems be in charge of this one – at least they are not perceived to be ideologically opposed.

A different minster, the smoothly persuasive Philip Hammond for instance, would help – but still that clarion call “You can’t trust the Tories on the NHS” would resonate.

Cameron recognised the NHS challenge for the Tories while in opposition – why’s he found it such hard going in government?