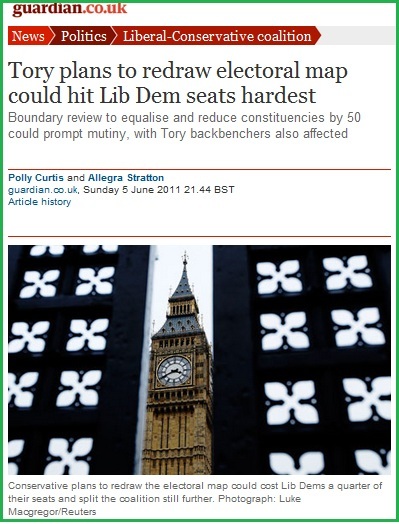 Have they the power to stop the changes going through?

There’s a story in today’s Guardian that adds to information I’ve been getting in the past few days – that the Lib Dems might veto the planned boundary changes when these come up for parliamentary approval some time before the 2015 general election.

The Guardian report notes that under the plan to decrease the number of MPs from 650 to 600 it is projected that the Lib Dem could come off much worse than the other main parties. The report quotes research suggesting that Labour would lose 5.2% of their seats, Tories 6.6% of their seats with the Lib Dems losing 24.6% of the seats that they currently hold.

The changes are all part of the legislation that went through parliament in February to set up the referendum, to reduce the number of MPs and to introduce new procedures for dealing with boundary processes.

Under current plans the first draft proposals for England will be out in September with Scotland and Wales following a few weeks later.

But February’s Act is not the end of the matter. The actual seat changes will have to be voted on by parliament and given that the Tories have just 306 of the current 650 seats they will almost certainly need the support of the LDs to get them through.

My understanding from good sources is that if the Tories continue to drag their feet on reforms to the upper house then the yellows, already bruised by the AV campaign, might vote against.

If that happened then the changes wouldn’t happen and the perceived disadvantages that the current system has for the Tories would continue.

The commons vote that has to take place on the seat changes themselves is just about the only leverage that Clegg’s party still has within the coalition and today’s Guardian report is only going to add to their resolve not to give that up easily.