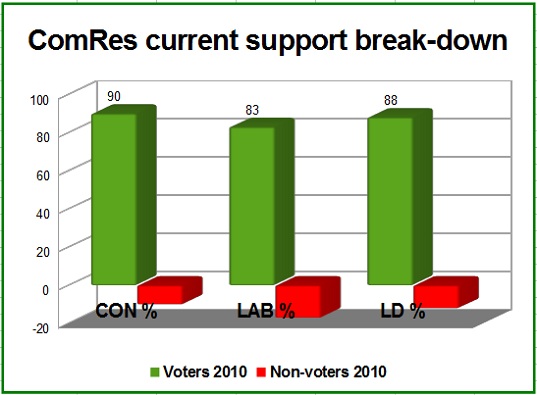 Would the ICM approach have produced a blue lead?

But looking at the detailed data there’s a huge difference in the “quality” of support between the parties.

As the chart shows 90% of those currently saying they are Tory voted at the May 2010 general election. The LD proportion is slightly smaller at 88% while Labour is languishing at 83%.

Unlike Britain’s most accurate pollster, ICM, ComRes applies the same weightings to both declared 2010 voters and 2010 non-voters. ICM gives the latter a “value” of half because all the research indicates that those electors most likely to turn out at the next election are those that did so at the last.

My guess is that if the ICM algorithm had been applied to the ComRes numbers then the big story overnight would have been of a Tory lead of 2-3%.