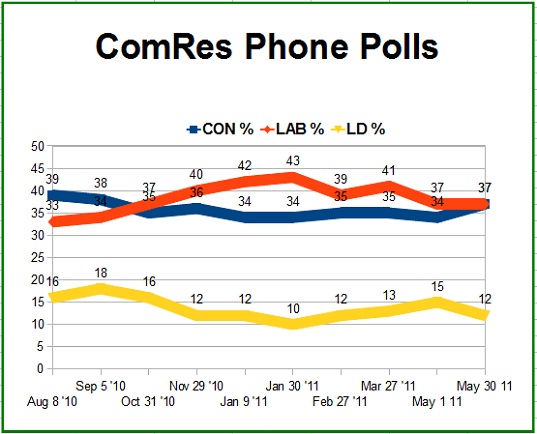 This is only the second telephone survey since the May 5th elections and comes from the pollster that came in a respectable second place with its final AV poll.

The LDs are down three to 12 while support for other parties, including the SNP, UKIP and Greens, is up by two points 14 per cent.

Although Labour are not down in this survey – the gap has closed because the Tories are up – the fact that the lead has gone will create some nervousness at Miliband Towers. Back in January the pollster had Labour with a nine point lead.

ComRes also asked a series of questions over the super-injunction controversy:

â€œJudges have been too willing to grant injunctions to enable the rich and famous to protect their private lives.â€ 70 per cent agreed, 25 per cent disagreed.

â€œCelebrities and sports stars owe their lifestyle to their public profile so they should not complain about intrusion into their private lives.â€ 65 per cent agreed, 30 per cent disagreed.

â€œThe Government should ensure greater regulation of the internet and social media like twitter to protect peopleâ€™s rights to privacy.â€ 54 per cent agreed, 40 per cent disagreed.

â€œMPs and Peers who have used parliamentary privilege to reveal super-injunctions were right to do so.â€ 44 per cent agreed, 48 per cent disagreed

ComRes have two polling series – one, like tonight’s, is carried out by phone – the other is done online. My comparisons and the chart above are with previous phone polls.

UPDATE: The latest YouGov daily poll has a very different picture – CON 37%: LAB 42%: LD 9%. In only one survey since early December has the pollster had Labour below 40%. In the same period ICM, the pollster that got the AV referendum right to within 0.1%, has not had Labour out of the 30s.