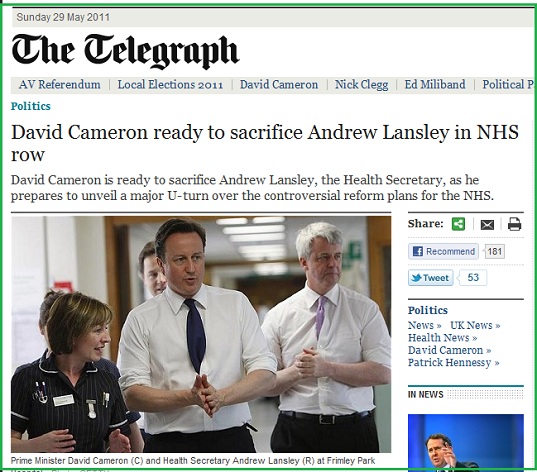 Extracts from the Sundays

The Indy on Sunday: “Chris Huhne, the Energy and Climate Change Secretary, has dominated the headlines for three weeks now. The intensity of media interest is justified by the seriousness of the allegations against him. It is not so much the matter of an eight-year-old alleged speeding offence. It is the allegation that he asked someone else to take his penalty points, which would be an attempt to pervert the course of justice. And there is his current denial, which, if proved false, would be the most damaging. As we go to press, it looks as if Mr Huhne may survive, if only because of the impossibility of proving wrongdoing beyond reasonable doubt”

Patrick Hennessy – Sunday Telegraph: “The Sunday Telegraph has learned that the package of changes to the Health and Social Care Bill is likely to be finalised in around three weeks’ time after a bruising internal battle between Mr Cameron, Mr Lansley and Nick Clegg. Senior figures at 10 Downing Street have begun to “war game” Mr Lansley’s departure on the ground that his Bill will be so radically different from its original state that he no longer has the credibility to drive it through…. A fellow Conservative minister said last night: “I have immense personal sympathy for Andrew but if the Bill becomes something totally different from his original proposals then he will simply not have the credibility to lead the reforms.…”

The Observer: “The health secretary, Andrew Lansley, has been forced into a major U-turn on funding for public health campaigns, after evidence emerged that the spending freeze had cost lives….”

Matthew D’Ancona Sunday Telegraph: “As for Lansley, he has good reason to feel aggrieved and betrayed. His lifeâ€™s work is being dismantled before his very eyes. Support that was promised is being withdrawn. He is being deserted in the most ruthless fashion. Number 10 accepts that he may well resign. Whether or not he does so, the final insult is the unambiguous signal he has already been sent by his most senior colleagues: that his departure, however regrettable, is a price worth paying. Anything â€“ anything â€“ to make this political horror-show go away.â€

Mail on Sunday: â€œIn a statement, a spokesman for Essex Police said: â€˜We can confirm we have spoken to two key people on Tuesday at a police station in Essex and in London. We donâ€™t expect a major update on this case for up to two weeks.â€™ Essex Police declined to comment further.”

Ladbrokes have eased the Huhne next to exit price to 4/6 while Lansley is now the 7/1 second favourite. They both might go but the critical element is the timing and here the pressure seems to be off Huhne and onto Lansley.