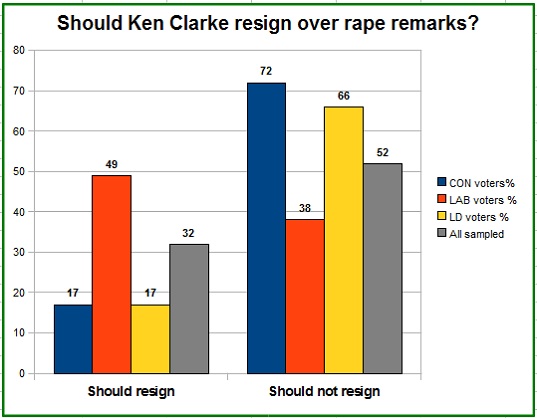 Will this stop the Speccie’s team getting too excitable?

Ever since Ken made his unfortunate remarks on 5Live last Wednesday there’s been an air of excitability and expectation in some of the postings on the Speccie’s CoffeeHouse blog. Several posts gave the impression that now, at least, Cameron would have to get rid of the justice secretary whose views on the EU, the Iraq war and a less than authoritarian stance on crime have not endeared him to sections of the blue team.

Even today the paper’s editor, Fraser Nelson, was declaring in his NOTW column that “Clarke’s joined the living dead”.

Their views, however, don’t seem to be shared by those Tory voters who are on YouGov’s polling panel and who took part in the latest published survey. The party splits on the question of whether Clarke should resign are are shown above – and as can be seen there’s pretty overwhelming support for the old bruiser from Conservative voters.

Will it save him? Who knows but it perhaps shows that some of the more right-wing pundits and commentatotrs are less in touch with grass-roots opinion than might be imagined.

The Ladbrokes price against Ken being the next cabinet exit have moved out from 5/1 to 7/1.