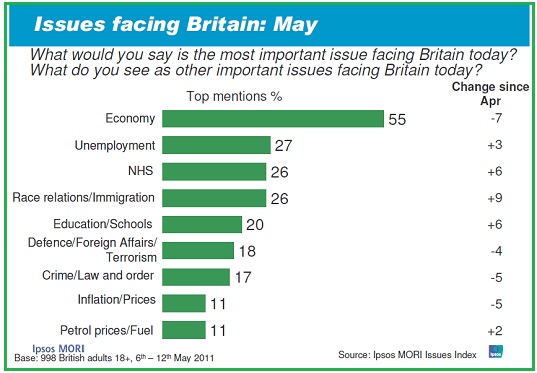 Can the blue team ease the worries?

Every month for nearly a third of a century Ipsos-MORI has asked the same two part-question question in the same standard way which, almost uniquely, is totally unprompted. The pollster asks “What do you see as the most important/other important issues face Britain today”.

Unlike the firm’s voting intention polls which are carried out by phone fieldwork for the issues index is done face to face. Given the unprompted nature of the response this is probably the best way of carrying out such research.

What I like about it is that the questioning is in no way leading and the fact that it has been carried out in the same way for so long. No other pollster can match it.

MORI has records going back to the 1970s which provide a unique resource for those wanting to track how specific areas were being rated.

As you’d expect the economy is still top of the public’s concerns quite a margin – but this month we see a sharp rise in both race relations and immigration and the NHS as you can see here.

Interestingly, this month, crime is on the way down – but that NHS figure is at its highest since January 2008. That reflects the increasing coverage the plans to change the NHS have been getting.

It’s against this background of public opinion that the Cameron “NHS listening” exercise is taking place.