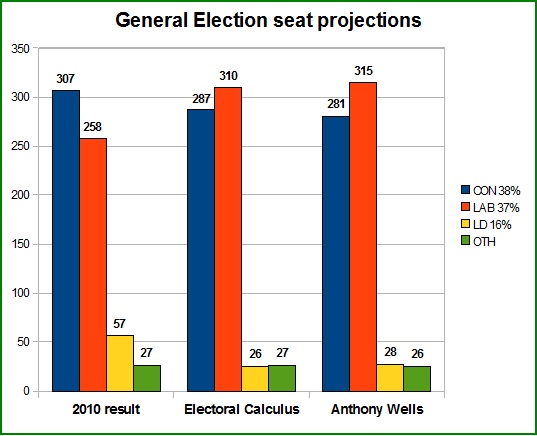 What lead does he need to be confident of a majority?

The above chart shows the Commons seats projections from Martin Baxter’s Electoral Calculus and Anthony Wells’s UKPR when the Rallings and Thrasher National Equivalent Vote shares from last Thursday’s local elections are fed in.

As can be seen from the chart the Tories would drop 20-26 seats and Ed Miliband’s Labour would be 10-15 seats short of a majority even though, on these projections , it has a smaller vote share. The harsh facts for the blues of Britain’s electoral geography remain.

This is not surprising given that Labour’s position has improved radically since May last year when the GB shares were CON 37: LAB 29.7: LD 23.6. This is, of course, based on the existing boundaries – the new ones are not expected to have been finalised before 2014.

The Tory position has to improve substantially before going to the country is even a remote possibility. We are probably talking of double digit leads over Labour.

An added complication is that if Dave risked it and found himself short of the 326 mark the remaining Lib Dems would hardly be keen to go into coalition again.Cameron would need to be certain of a majority.

For a blue majority to be possible with the current boundaries Labour has to move back a lot closer to the share that Gordon Brown achieved in May 2010. That, I suggest, is not going to happen.

Even with the much-talked about boundary changes and seat reductions my CCHQ source says the blues can only expect to improve their position in relation to other parties by a maximum of about 12 seats. These are not the panacea that many Tories are looking for – many of the factors that make the electoral environment so favourable to Labour will remain.

So a 2011 election looks very unlikely.