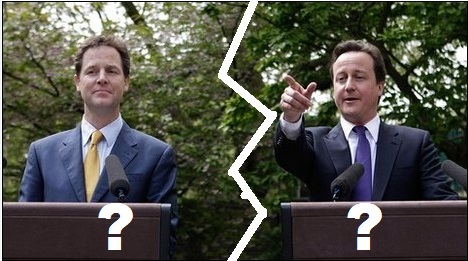 How can the coalition put the pieces back together?

That the media focus has been on the Lib Dems and Nick Clegg after this weekâ€™s historic set of election is understandable. It was a very bad night for them and him but more relevantly, it was predictably so and the media love a news story that fits their narrative. Nonetheless, the reaction of senior Lib Dems such as former leaders Lords Steele and Ashdown and cabinet minister Chris Huhne in interviews yesterday was telling.

A large part of that may well be down to the AV vote being lost and being lost by a large margin. The double loss of the advancement of â€˜fair votesâ€™ and the electoral benefits it would bring are no doubt bitterly felt. That the No campaignâ€™s tactics were seen as underhand and tacitly or even openly endorsed by their coalition colleagues right up to the highest level just makes it even worse.

Other factors serving to deepen the despondency will be the fact that the Conservatives actually made net gains while the Lib Dems suffered heavy losses (with many of the Toriesâ€™ gains at their expense), and the knowledge that this is just the first year of a 4-year cycle of local elections.

Whatever the reasons, those senior voices were calling for a â€˜more businesslikeâ€™ approach towards working within the coalition, presumably code for fewer informal agreements and less willingness to go along with policies they have reservations about that arenâ€™t explicitly in the coalition agreement.

Iâ€™m far from convinced that this would serve the Lib Dems well. Itâ€™s not possible to credibly be within the government and to appear to be opposed to much of what itâ€™s doing or wanting to do. The risk is that it would alienate LD/Con floating voters without winning back any LD/Lab floaters.

It would also place the Lib Dems on the reactive most of the time as the Conservatives hold all the big-spending departments and all the Great Offices, so most of the reforms would emanate from them – and such an approach would inevitably produce a response in kind from the other half of the coalition. On the other hand, emotions and internal politics can lead to people doing things that are counterproductive so it may happen anyway. Itâ€™s also worth noting that the NHS revolt began not in the cabinet or Westminster but from the voluntary party and itâ€™s they whoâ€™ve just taken the hit.

The other danger comes from the opposite end of the coalitionâ€™s ideological spectrum. The defeat for AV, the Lib Dem losses and Tory gains may well stiffen the sinews of those within the Conservatives who feel that enough has been conceded already. Against the backdrop of an underwhelming Labour performance, Ed Miliband being a prominent face of the Yes campaign, an unpopular Lib Dem party and leader, a PM who rediscovered his campaigning mojo and the cuts not having fully hit yet, the temptation may be to push the leadership hard to go to the wire and call Lib Dem bluffs – if bluffs they be – on issues like votes for prisoners or the EU budget.

These are dangerous pressures on the PM and will need careful handling. It would be easy for passions and miscalculations to lead to events running out of control in a hothouse situation. The best odds on a 2011 election are 9/2 with Betfred. Thatâ€™s still too short for my liking – a Golden Rule of political betting is that thereâ€™s usually value betting against something unscheduled happening. Even so, itâ€™s not far off and worth watching the price of.