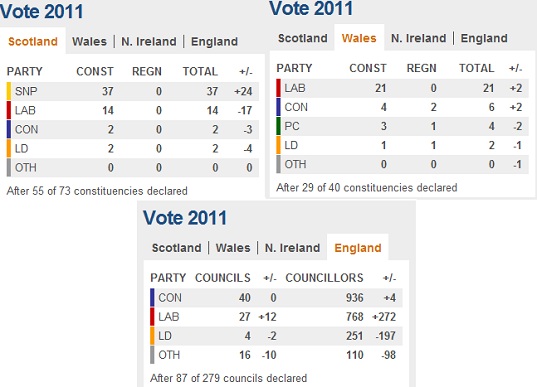 What’ll happen in the Yellow-Blue encounters?

Above is a brief snapshot from the BBC site of what has been an appalling night for the LDs, a poor night for Labour in Scotland and a great night for the SNP.

North of the border the projection from the BBC is that the SNP could have an overall majority which is a massive turnaround on what it looked like on April 20th.

It is extraordinary that just fifteen days ago Labour was favourite to finish up with most seats in the Scottish parliament. My best bet was 7/2 on March 28.

Throughout the day we’ll see many more English results many of which will be LD-CON contests. From 4pm the count in the referendum will start and all outstanding council counts will be put to one side.