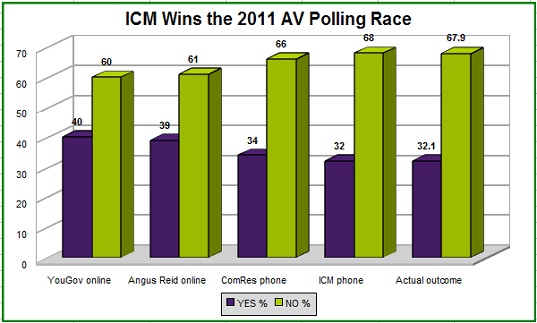 Do phone firms get better results?

With barely a handful of declarations from Northern Ireland still to be made it’s almost a certainty that NO is going to win the referendum by a margin of about 68.5% to YES’s 31.5%.

This is a great achievement for Matthew Elliot and all at NO2AV as well as to ICM whose final poll published in the Guardian on Wednesday evening had it 68-32.

Interestingly, as the chart shows, it was the two phone polls that got closest to the final outcome with the online firms a few percentage points away.

For the pollsters it is not often that you can measure an outcome against a poll and ICM can rightly be pleased with themselves that their final survey looks set to be almost spot on.

Unless those final few results from NI are wildly different it’s well done to Martin Boon and his team.