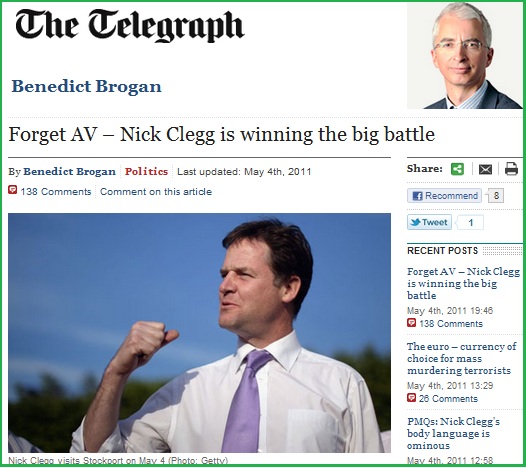 Is Brogan right about Clegg winning the “big battle”?

In an interesting piece for the Telegraph Ben Brogan is arguing that on the key policy issues it is the LDs who are largely setting the agenda.

“.. No wonder Tories hope that from tomorrow, the Lib Dems will cease to call the tune. The dog will be free to wag its tail again â€“ indeed, if anything, Mr Cameron will have to restrain those urging him to call an immediate election to capitalise on Lib Dem discomfiture..Yet those same Tories should worry that while Mr Clegg looks like a loser in public, he is actually winning the policy debate: in the most fundamental areas of his programme, Mr Cameron shows every sign of surrendering to the Lib Dems….

… The Open Public Services White Paper that was promised for last year,…. is being systematically filleted by Danny Alexander, the Chief Secretary to the Treasury, who is proving adept at using his internal leverage to shift Coalition policy in favour of the Lib Dems.

..senior figures tell me that the Lib Dems are demanding that the pause on NHS reform â€“ itself a significant watering down of the original agenda â€“ be extended across other areas of contention, from education to elected police commissioners. Ominously, they say that Mr Cameron and Mr Osborne are happy to give way to keep the Coalition going, and to avoid policy adventures that might frighten the voters..”

The yellows will be delighted to read this but I just wonder whether the Brogan piece is part of an orchestrated effort to talk up the LDs in advance of what will be a disastrous referendum result. He, after all, is very close to Number 10 and it wouldn’t be inconceivable for this line to be suggested to him.

The big picture, of course, is that until the Tories start getting 8% plus leads in the polls then talk of an early general election is meaningless. If Cameron/Osbrone want to continue governing they require the support of their partners who might be feeling bruised on Friday.