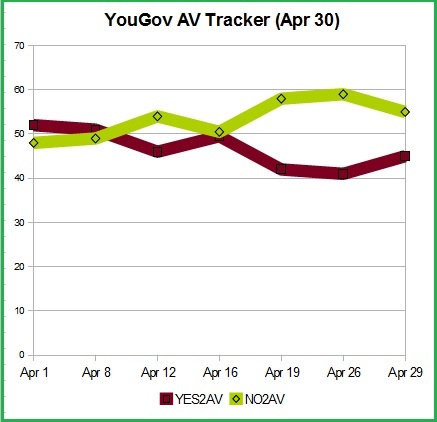 And the firm has Scotland tightening as well

The Sunday before the May 5th elections and from the information that’s available as I write YouGov has YES closing the gap from 18 points last Tuesday to 10 points overnight in its Sunday Times poll. The firm has a split of 55-45 amongst decided voters.

I wonder whether the heightened anti-Tory rhetoric from some Lib Dems is taking a bit of the pressure off Nick Clegg who has been the main target of the NO2AV campaign? The firm now has YES2AV ahead amongst Labour voters.

We really need to see other findings from established pollsters before drawing too many conclusions.

YouGov’s fieldwork took place on Thursday and Friday and the online firm is predicting an overall turnout of 39%. So far the data isn’t available and I’ll update if that produces anything to add. In all the regions of England NO has healthy leads. In Scotland and Wales YES is ahead while in Northern Ireland the firm has it at 50-50.

There are other AV polls out showing bigger NO margins but these come from non-BPC firms with little comparative data.

A YouGov poll in Scotland is also showing a narrowing of the SNP’s lead over Labour – but so far the detail doesn’t seems to be available online and the only information I can find is in this commentary by John Curtice.

Survation, meanwhile, has a poll out for the Leicester South by-election for the Indy on Sunday. This has with changes from the general election:-

So no real surprises though I would have expected UKIP to be making better progress.