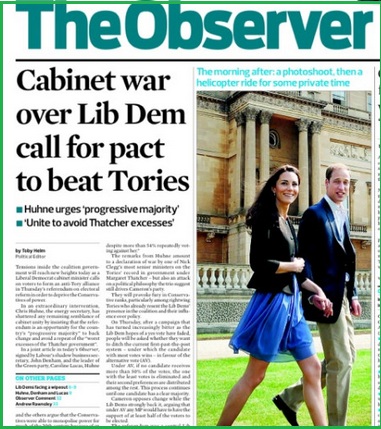 Is this the big story of the night?

The full story by the Observer’s Toby Helm can be found here.

He writes: “…..In a joint article in the Observer, signed by Labour’s shadow business secretary, John Denham, and the leader of the Green party, Caroline Lucas, Huhne and the others argue that the Conservatives were able to monopolise power for much of the 20th century because of an “unfair” first-past-the-post system.

“Britain consistently votes as a centre-left country, and yet the Conservatives have dominated our politics for two-thirds of the time since 1900,” the three say. “On only two occasions in that long century â€“ 1900 and 1931 â€“ have the Tories won a majority of the votes. No wonder David Cameron says the current system has ‘served us well’.”

They add: “For those who weren’t well served by the Tory 20th century, fair votes matter. They matter for the millions of voters who suffered the worst excesses of the Thatcher government despite more than 54% repeatedly voting against her.

The remarks from Huhne amount to a declaration of war by one of Nick Clegg’s most senior ministers on the Tories’ record in government under Margaret Thatcher â€“ but also an attack on a political philosophy the trio suggest still drives Cameron’s party.

They will provoke fury in Conservative ranks, particularly among rightwing Tories who already resent the Lib Dems’ presence in the coalition and their influence over policy….”

It might all settle down once the elections are out of the way – but it might not. There’s fury and anger on both sides of the coalition but it’s not clear where will this lead.

Are we heading to a loveless marriage where neither partner is able to leave?