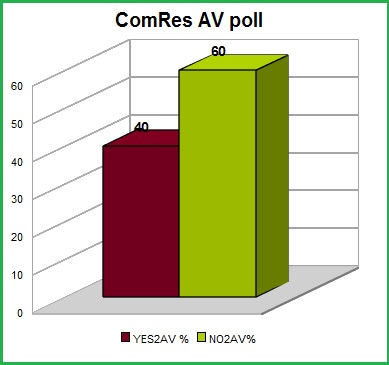 NO moves to its biggest lead of the campaign

A new poll by ComRes for tonight’s London Evening Standard has the biggest lead for NO so far seen in the referendum campaign when the actual wording was put.

So far I cannot find any further details and don’t even know whether this was online or by phone. Also ComRes has had an odd approach to turnout weighting using responses to their general elections voting certainty question.

Whatever this split is in line with all the polls we have seen in the past 11 days and there is no comfort there at all for the YES camp.

UPDATE: We’ve now got the detail from the poll which was carried out by phone with the fieldwork finishing on Easter Monday. An AV-specific turnout question was asked and the 60-40 split was based on those saying they were “certain to vote”. Amongst all those who expressed a preference the split was 58-42.