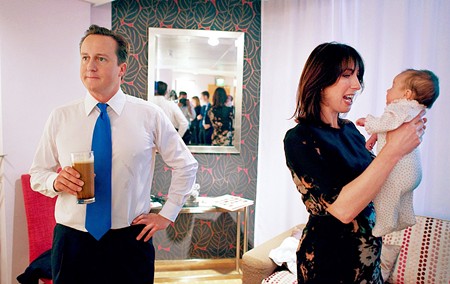 The recent kerfuffle over the PMâ€™s â€œCalm down, dearâ€ comments seems to me to have to have rather missed the point. Cameron exposed a weakness at PMQâ€™s, but it wasnâ€™t a weakness for rather camp Michael Winner impressions, it was a failure to control himself when heâ€™s not on top of his brief . A trait that is particularly obvious when heâ€™s discussing the NHS. This is something that the Prime Minister clearly needs to work on.

There is of course another weakness which Cameron has displayed since becoming Conservative Party leader, and that is his desire to portray himself as one of the people, a normal middle class bloke â€“ something he clearly isnâ€™t, but something he seems determined to work at relentlessly.

Itâ€™s five years ago this week that the â€œFake Daveâ€ meme was born, with the memorable story of the cycling young Conservative leader, polishing his green image, wind in his hair, unfortunately with chauffeur and briefcase in his rear view mirror.

That image stuck. Four years later, before the last election as PR week reported: “..Worryingly for the Conservatives, 37 per cent of people also remÂ­embered the 2006 story of leader David Cameron cycling to work, trailed by a chauffeur-driven car, in a botched attempt to display his green credentials..Some 18 per cent believe this story affÂ­ected the party’s current reputation.”

Cameron appears not to have learnt from this, indeed his attempts to redefine his class background, which he assumes is a political weakness, run the risk of turning something which the public are not overly bothered about, into one of sincerity, which can be very damaging..

Rather than learning from this, Daves attempts to portray himself an ordinary bloke appear to be accelerating. Recently weâ€™ve had the lounge suit at the wedding story, discovered Daves tangles with IKEA flatpack furniture and been briefed about his use of low cost airlines in Departuregate,

Perhaps we should have spotted the signs last autumn with the â€œvanity photographerâ€ own goal, despite producing one of the finest examples in the genre, â€œA common man enjoys a hastily poured 440ml of Guinnessâ€ which appears at the top of the thread, it was obvious that putting him on the public payroll would backfire.

All politicians try to define themselves in the publics mind, Cameron runs the risk of becoming defined by his attempts to define himself.

Dave should take a leaf out of Borisâ€™ book, and relax a bit. And get briefed on the NHS.

Tim has posted 32,618 comments on PB since his first contribution in June 2005