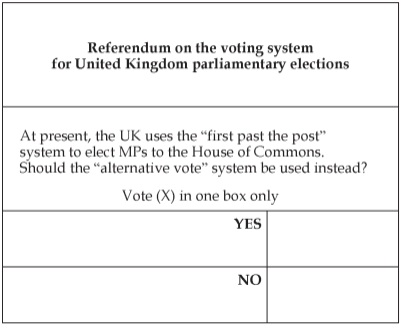 On the previous thread Beverley raised an issue that I have been pondering over – is the ballot form itself confusing and does it favour YES?

She wrote:” I voted NO to AV yesterday, but I very nearly voted YES instead. I got the ballot paper and read the pre-amble that said (paraphrasing) â€œthis is about whether to retain the FPTP systemâ€. Below was the actual referndum question and the YES and NO boxes.

After reading the pre-amble I nearly ticked the YES box. The AV question was, in a logic sense, the other way around and you had to vote no to KEEP the existing system.

I wonder how many people will tick the YES box thinking the preamble is the question?

My instinct is that there is a marginal advantage to YES but I cannot find any supporting polling evidence.

I’ve been ploughing back through the AV polls to see if there is any correlation between those surveys where the straight question is put with bare “YES”/”NO” as the possible responses – and those pollsters which have sought to put some explanation to underline what the two options mean.

With ICM it is “Yes – Alternative Vote should be used instead/ No – we should keep the first past the post system”.

Looking at the polling outcomes it is hard to see any correlation between the response format and what the polls have found. Things might be different in the voting booth.

I have little doubt that if it was an unexpected result against the polls then those who do not like outcome would try to argue against the referendum’s validity.