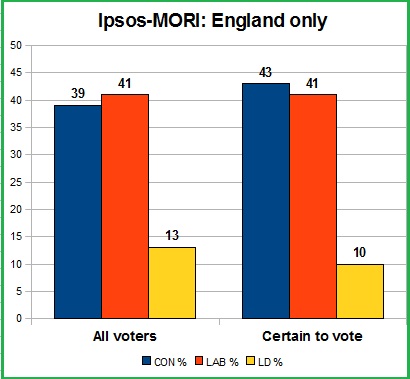 Is this a pointer to the locals?

As a follow-up to last night’s thread about the English local elections I thought it’d be useful to extract the England only data from this week’s Ipsos-MORI poll. The firm is the only which which shows such a breakdown.

The reason that there’s a different picture between the two sets of data is that Lib Dem supporters were much more likely to say they are not 100% to vote.

At the general election last year the Tories had an 11.5% lead over Labour in England compared with a GB gap of 7.3%.

Remember that this is a Westminster voting intention poll and not a local election one.