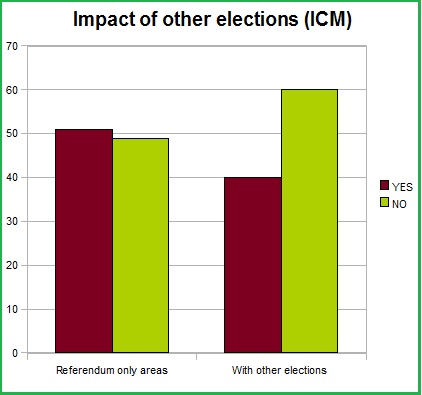 Was it a mistake to push for the vote on May 5th?

A big debate while the legislation was going through parliament was whether it was right to hold the referendum on the same day as other elections.

Scotland, Wales and Northern Ireland have their devolved general elections alongside the referendum on May 5th while in England there are local and mayoral elections in many areas but not all.

As part of their poll ICM sought to distinguish between the solus and multiple election areas and came up with some interesting findings featured above.

Where the referendum is the only vote taking place then YES has a 2 point lead. Where other elections are taking place at the same time the split is 40:60 YES:NO.

Clearly electors are more motivated to go to the polling stations to elect councillors and devolved parliament members than are they to take part in the AV ballot.

If it does come out that the solus election areas vote for change but the other areas don’t we can we expect the YES team to say that the contination of FPTP is being foisted on the UK by those who can’t be arsed?

After all a similar argument, but the other way, was being made at the weekend by Tory grandees.