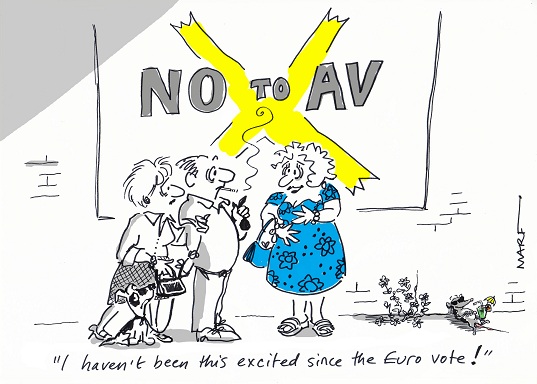 Is comfort-zone campaigning going to cost it the referendum?

The Yes leaders appear to have made no effort to gain any traction with voters to the right of centre. At the very minimum, theyâ€™ve not succeeded in doing so. Not a single Conservative has been paraded, nor has anyone from the Orange Book wing of the Lib Dems, never mind from UKIP. For Ed Miliband, itâ€™s in marked contrast to the way in which he won the Labour leadership, which was in no small part because he understood the partyâ€™s internal coalition, where power lay and how to use it.

Itâ€™s also in stark contrast to the No campaign, where New Tory and Old Labour took to the stage together and which has campaigned more imaginatively and effectively throughout. The No side has also, rather audaciously, grabbed the â€˜fair votesâ€™ flag and done its best to make it its own. â€˜One person, one voteâ€™ is a simple and effective slogan and one that Yes has had trouble countering, perhaps because theyâ€™d taken that they represented fair votes for granted.

The simple fact is that at the last general election, the country was split roughly 50:50 between right and left of centre, (basing the Lib Dem internal split as implied by how their vote has splintered since, and the preferences of those remaining in the yellow camp).

By aligning so closely with just one of those sides, in personnel and argument, itâ€™s difficult to see what the grand strategy in the Yes campaign was. If it ever had one. After all, it should have known that by no means all to the left of centre were in favour of AV.Â  How did it ever expect to pass 50%?

The game is close to up now. It might still be more than two weeks to polling day but postal votes are being sent imminently and the Bank Holidays, school holidays and royal wedding will all disrupt the remaining campaigning. The opportunity for Yes to get back on the front foot is extremely limited. Before it can do that, it has to understand how to appeal to a much wider range of the electorate. And it has to want to.