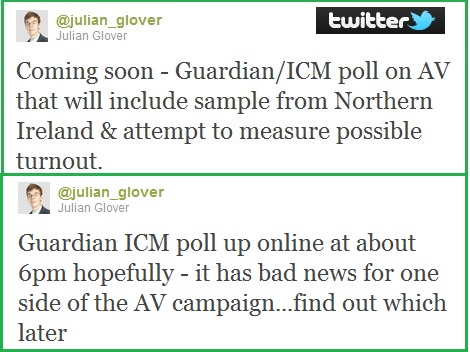 But will it favour YES or NO?

The Guardian’s polling specialist, Julian Glover, has posted two intriguing tweets on tonight’s ICM poll for his paper which, extraordinarily will be the first non-online survey for two months on the referendum.

It’s clear from the Glover Tweets that the ICM poll is going to be news though I can’t even guess which side will be benefiting.

The poll will also be the first to incorporate Northern Ireland voters in its sample – a group that so far has been ignored even though it’s expected that turnout in the Stormont election, being held at the same time, could exceed 60%.

On top of that ICM appears to have made an effort to carried out a refined approach to the turnout issue and my guess is that it will have done something to identify those most likely to vote in the local elections being held at the same time.

Unfortunately I will be at the PB party in London when it comes out – but I’ll look at it more closely on my way home.