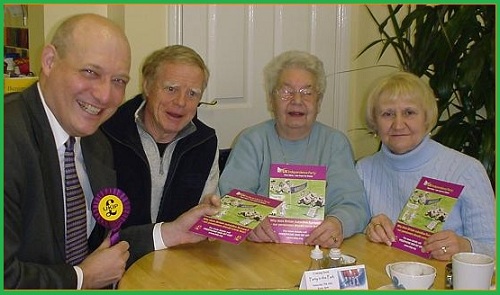 Rob Ford looks at the possibilities

In a recent post, Mike noted that the Conservatives may be pushing the immigration issue to defend themselves from defections to UKIP. We agree that UKIP pose a real threat to the established parties at this yearâ€™s local polls, but UKIP supporters are not merely grumpy old Tory right wingers.

In a recent study with Matthew Goodwin (Nottingham) and David Cutts (Manchester), which can be found here I examined the UKIP electorate at the 2009 European Parliament elections, when the party came second with 16.5% of the vote, their strongest ever showing in any UK election.

Thanks to a specially commissioned YouGov poll, we had information on the background and attitudes of 4,500 UKIP supporters. We also knew whether they intended to support UKIP in the European Parliament elections only or also in future domestic elections.

This distinction proved crucial. UKIP supporters in the European Parliament elections tend to be older, more middle class men with Conservative sympathies. They largely planned to return to the Tories at future domestic elections. We call such voters â€œstrategic defectorsâ€ â€“ they are socially conservative Eurosceptics who seem to be motivated principally by a desire to send a message to the Conservative party. In terms of attitudes they seem driven principally by Euroscepticism (unsurprisingly) and by negative views about immigration and immigrants.

Those who planned to stay loyal to UKIP â€“ the voters we dub the â€œcore loyalistsâ€ are very different. They are more working class, more economically insecure, and more likely to report Labour family backgrounds. They are also more hostile to the Conservatives â€“ for example, being much more likely to agree that the Conservatives have â€œnever cared about people like meâ€. These voters are also very Eurosceptic, but they seem to be motivated more strongly by a populist hostility to the whole political class (â€œsod the lotâ€) and by anger about immigration.

In both background and attitudes, there are strong similarities between the â€œcore loyalistâ€ UKIP electorate and the BNP support base. However, UKIP is capable of winning over a much larger vote because it is not handicapped like the BNP by a reputation for extremism and racism. This reputational baggage puts many voters off the BNP, even if they agree with its policies.

Obviously, the political environment has changed a great deal since 2009. Arguably, these changes have made a UKIP breakthrough more likely. With the Conservatives now in government, many of the right wing Tory â€œstrategic defectorsâ€ we identified in 2009 may be tempted to defect once again to UKIP to signal their unhappiness with the compromises and centrism of coalition.

Meanwhile, many voters remain angry over immigration and hostile to the political class. The austerity cuts may have stoked this anger up further, and the organisational and financial crisis in the BNP has left UKIP as the only outlet for it in many parts of the country. UKIP therefore have an unprecedented opportunity to break through on the domestic scene. They can appeal to both of their electorates â€“ the grumpy Tories and the angry populists with little competition from either the mainstream right or the far right fringe. It is no wonder Cameronâ€™s Tories are concerned. However, an established UKIP is likely to draw support from across the political spectrum, as UKIPâ€™s principle appeals â€“ Euroscepticism, social conservatism, anxiety about immigration, populist hostility to elites â€“ cut across traditional political divides.

Labour should be equally worried that white working class voters who had begun to defect to the BNP may find UKIP an even more appealing alternative free of the BNPâ€™s fascist baggage, while Liberal Democrats should be concerned that UKIP will usurp their role as repository for local discontent with the national government. In recent years, breakthroughs by populist, anti-immigrant â€œradical rightâ€ parties have shaken up politics in a wide range of European countries, from Sweden to the Netherlands. UKIPâ€™s breakthrough could deliver a similar shock to the British system.

Dr Robert Ford is Research Fellow in Politics at the Institute for Social Change, Manchester University