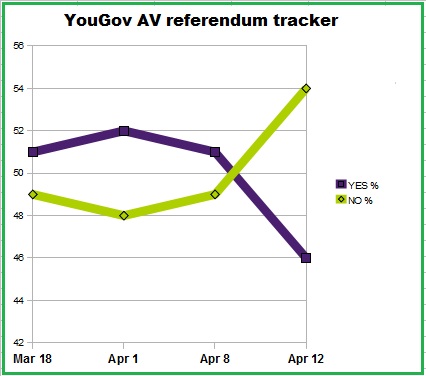 What’s behind the shift?

There’s been a sharp move to NO reported from YouGov and it’s all happened in the space of four days.

At the weekend the Sunday Times survey from the firm had the YES campaign with a two point leader amongst decided voters. Today’s SUN is now reporting that the latest poll, where fieldwork closed yesterday afternoon, has NO eight points ahead.

This is the first time that News International’s pollster has had NO ahead when the actual question on the ballot form was put.

Note that PB is reporting all AV polls after re-percentaging the figures to strip out those in the sample who did not express a preference. This is the standard polling procedure with Westminster voting intention polls and allows better comparison between the firms.

Can I underline what YouGov’s Anthony Wells has written about the move on UKPR – “I will add my normal caveat about sharp changes in polling â€“ until it is supported by other polls it could always turn out to be an outlier”. Also, unlike Anthony, I have yet to see the detailed data.

What could be significant is that the media is only now taking an interest in the issue and that this could have impacted on opinion. The first NO election broadcast went out on Monday evening. YES had its first showing last night after the fieldwork had closed.

An issue with the referendum polling is that we have not see any numbers at all from a telephone pollster since February. Ipsos-MORI and ICM did not include the question in their March surveys while the Populus and ComRes findings have come from online surveys. Also Populus did not use the question on the ballot.

MORI and ICM are polling over the weekend and we should get the findings next week.

According to Anthony the latest YouGov data is turnout weighted and that is likely to be the deciding factor.