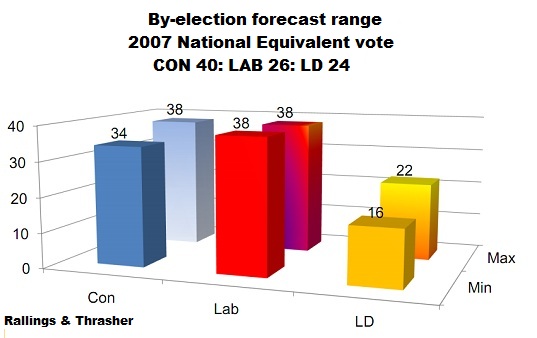 Do by-elections point to a less bad night on May 5th?

One of the most surprising sets of data presented by Professors Rallings and Thrasher at the Political Studies Association seminar on the May 5th local elections is featured above.

For a decade and more the two political scientists have produced a national equivalent vote share projection based on each set of local election results. In 2007, when most of the seats being contested this year were last up, the split was CON 40: LAB 26: LD 24.

The two also make predictions for each year’s local election day, based on local by-elections results, and their projections for May 2011 are in the chart.

This year, unsurprisingly, they are suggesting that Labour will move to 38% and the Tories to a range between 34% and 38%.

But as they explained at length they had had real problems with a Lib Dem share projection because of Clegg”s party relative success in local council by elections.

Feeding the by-election result data into their standard formula they came up with an incredible 22% – only two off what happened in 2007.

I don’t believe it either and I think that it will end up near to the lower end of the Rallings & Thrasher range.

Even such an outcome would be quite remarkable given that the one poll finding confined to the local elections, from YouGo last month, had the yellow share at 11%.

What’s it going to be I? I don’t know but I’ve entered into a wager with Tim that LD share from R&T will be at 14% or more. That’s still below the bottom end of the professors’ projection.