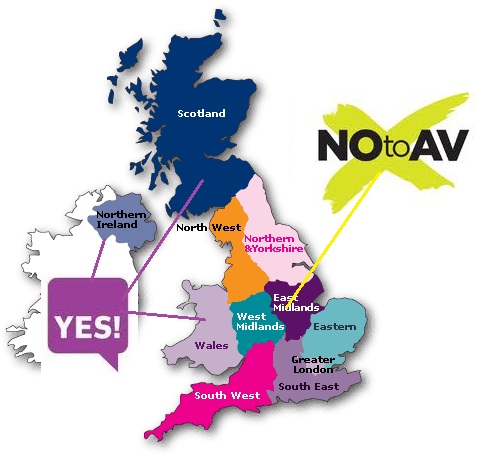 Could the real argument start AFTER May 5th?

With one poll after another showing the referendum race as neck and neck there becomes a real possibility that we could see the overall UK result being a YES but with England going NO.

The reasons have been discussed here before. The referendum coincides with general elections to the devolved parliaments in Scotland, Wales and Northern Ireland with turnout, perhaps into the 60s. In England there are either local council elections or, in many parts no other elections at all and it’s hard to see 40% being reached.

It seems almost certain that there will be disproportionate number of Scots, Welsh and Northern Ireland electors – something that could matter enormously if the proposition on the ballot is viewed differently compared with England.

We have no data whatsoever from Northern Ireland but there is a growing amount of polling evidence that that in Scotland, at least, there is more enthusiasm for a change in the voting system than south of the border.

So there must be a possibility of an English NO but a UK YES.

Given how controversial AV has been amongst the political classes, if not the public, you can such such a result being portrayed as a change being “forced upon England against its will“.

But how much potential is there for a constitutional crisis? At the 2005 general election the Tories won more votes in England than Labour and although it was commented on a fair bit in the days after the election it eventually petered out.

The Tory right, which is most resolutely wedded to FPTP, would be absolutely furious not least because this referendum changes the law without further reference to parliament. They see FPTP as the only way the blues can ever win back power with an overall majority. But would their likely claims of that it wasn’t legitimate have legs and what would it do to the coalition?

Every aspect of the coalition negotiations and how the bill got enacted would be scrutinised but would their fury eventually peter out? Why was, for instance, the vote scheduled on a day when there was almost bound to be differing turnout levels because some parts had simultaneous elections and others didn’t?