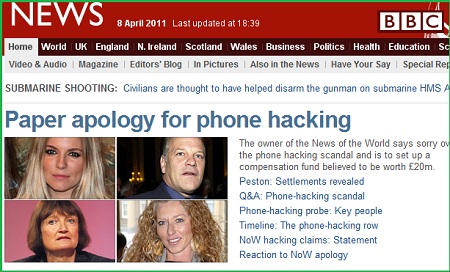 And could this still damage Cameron?

In a dramatic development this afternoon News International has apologised to several figures whose mobile phone mail-boxes are said to have been hacked into and at the same time set up a Â£20m fund to deal with compensation claims.

The firm is clearly hoping that this will draw a line under the affair which has continued for nearly three years since the Guardian first reported on the story.

Amongst those with political links on the list are Tessa Jowell, her estranged husband David Mills, lawyer and Joan Hammell, who used to work for John Prescott. The former deputy PM is not on the list.

The question is where this goes from here? Certainly there’ve been long-standing indications that several other newspapers were using the same methods and one or two tabloids have been giving the story noticeably less coverage if they have featured it at all.

There’s also the position of Cameron’s former press chief, Andy Coulson, who resigned from his Number 10 role earlier in the year. Will Cameron’s judgement in hiring him once again come under the spotlight?

The timing of this since quite smart. The commons doesn’t sit again until April 26th when, of course, the big focus will be the royal wedding. We’ve also got the build up to the crucial May 5th elections.