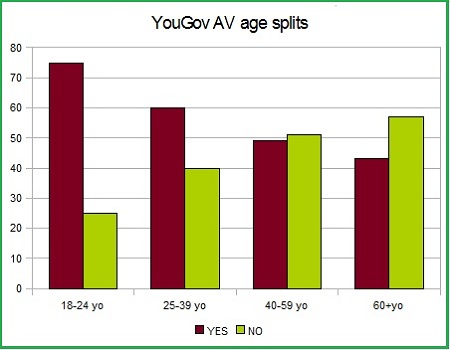 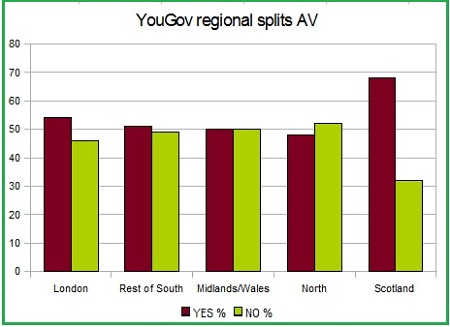 The above charts show two sets of data with the referendum voting intentions of decided voters from the latest YouGov poll.

The first shows how the referendum is being viewed by different age groups and illustrates the heavy reliance of YES voters in the younger age groups who are, of course, less likely to vote. It should be noted that YouGov did ask a voting certainty question and the splits reflect that.

In trying to work out why these two segments are the exceptions I wonder whether it’s because voters in the capital and north of the border are very familiar with non-FPTP elections and to them change is less daunting.

Since 2000 the London Mayoral election has been decided by a form of AV in which voters have two choices. In Scotland, of course, both local elections and the May 5th general election for the Scottish Parliament use a form of PR.

In Wales and Northern Ireland, of course, there are non-FPTP elections while the same applies to those living in the thirteen council areas in England where, after referenda, there are elected mayors.

So the votes of those not familiar, the group I am calling the “Non FPTP Virgins”, might be the NO campaign’s best hope.