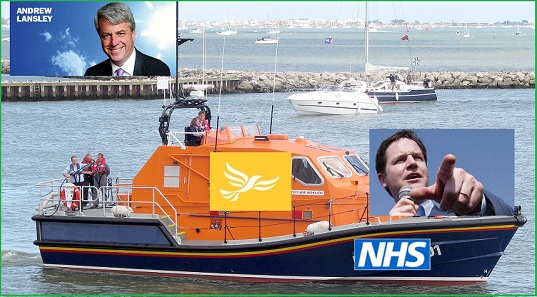 Is Clegg about to jump onto the Lansley Lifeboat?

The main story in the Indy on Sunday is a report, described as an exclusive, by Matt Chorley and Nina Lakhani that David Cameron will announce this week that the brakes are to be put on Andrew Lansley’s controversial NHS reforms.

The report states: “… Mr Cameron will publicly admit to mistakes in the plan by the Secretary of State, Andrew Lansley, to hand Â£80bn of health spending to family doctors, characterised by critics as privatisation by the back door.

Mr Cameron will announce a “pause” of up to three months in the progress of the Health and Social Care Bill through Parliament, to allow for more time to reassure clinicians, patients and coalition MPs…Mr Cameron is expected to share a platform this week with Nick Clegg, the Deputy Prime Minister, in an attempt to stave off a Liberal Democrat revolt. They will seek to reassure patients who fear the break-up of the NHS and the loss of free care at the point of use…”

Although, at this stage, this is not abandoning the plans it it has all the signs of a planned U-turn. The hands of Lib Dem MPs are largely tied anyway thanks to last month’s decisions at the party’s spring conference on the Lansley plans.

For Clegg and the embattled yellows this move could provide key ammunition in the run up to the May 5th elections.

For a key part of their “justification” for being in the coalition is that their presence helps moderate the Tories. What activists on the ground have sorely needed have been hard specific examples.

But Cameron cannot let Clegg’s team have all the glory for any changes. His whole leadership since being elected in December 2005 has been about “de-toxifying the Tory brand” and the perception that the UK’s “sacred NHS” was being interfered with was highly dangerous.

Ladbrokes have Lansley at 10/1 in their “next cabinet minister to leave” market.