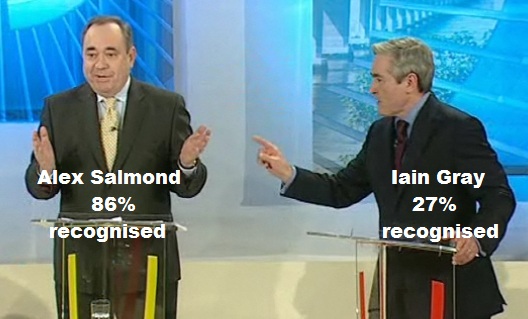 But how important is the recognition factor?

There’s a new Scottish poll out in the Sunday Times by PanelBase – a pollster that I have not heard of before.

The voting intention figures are in the revised Scottish voting table below and show an SNP lead of five points in the regional section while level-pegging with Labour in the constituency one.

An interesting variant is that poll participants were shown pictures of the party leaders and were asked whether they could name them. These were the figures: Alex Salmond 85%, Annabel Goldie 39%, Iain Gray 27%, Tavish Scott 19%.

According to the Press Association “John Curtice, professor of politics at Strathclyde University, said the poll highlighted the key weakness of Labour’s campaign as “the lack of a personality capable of reaching out to voters”.

I am sure that this is right – but what will its effect be on polling day?