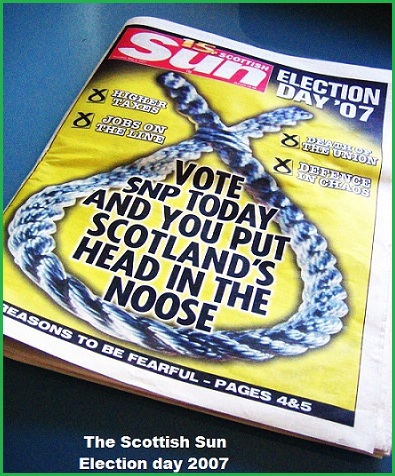 Almost whenever you talk to someone with a close interest in Scottish politics the above front page from the Scottish Sun on the day of the last election to the Holyrood parliament in 2007 will come up. This was powerful because adapting the SNP logo into a hangman’s noose sent a clear message to voters of what it wanted to happen.

As it turned the result was much tighter than many expected and some would argue that the Scottish Sun helped Labour.

So what’s the paper going to do this time? After abandoning Labour nationally in September 2009 the Sun is hardly going to make an exception for its Scottish edition – but there’s no way, surely, that it’ll back the Scottish Tories?

I know that many SNP supporters are hoping that Rupert Murdoch’s paper might turn its 2007 position on its head and go with the nats. Will it go so far and does it matter? To the former the answer is “possibly” and to the latter the answer is almost certainly yes.

In the past few days I’ve built up a reasonable betting position on the SNP because to my mind the odds are out of line with the chances of success. I’m postponing further investment until the Scottish Sun’s position becomes clear.

Betting prices: Ladbrokes have the SNP at 7/4 with Labour at 2/5. At Bet365 you can get 9/4 against the SNP with Labour at 1/3. One or two other bookies have slightly better SNP odds but they don’t accept my bets.