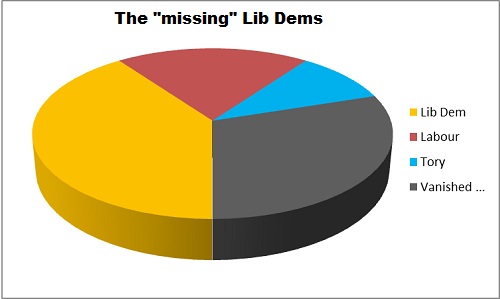 The YouGov Budget poll provides an opportunity to investigate where the Lib Dems from 2010 have gone. Regardless of the fact that different pollsters have found different levels of support for cuts/Coalition economic competence/blame levels, when we look internally in a poll which provides breakdowns by 2010 vote and current preference, we should (hopefully) be able to track some of the net churn.

So, in the YouGov poll, the first thing we see is that either the respondents were more likely to vote than the general populace, or there are a number of lying-weasel answers. According to the respondents, 30.3% voted Tory, 26.5% Labour and 21.8% Lib Dem. Compare to the actual vote share of the2010 electorate of 24.1%, 19.4% and 15.4% and we find that there are either more socially responsible voters in the sample than there should be â€“ or they are remembering something they didnâ€™t do.

Moreover, the Lib Dems have the highest â€œwe voted, honest!â€ factor: 26% more say they voted Con than should have done, 37% more Labour and 42% more Lib Dem. As has been noted on pbc before, a number of these should probably be told that â€œLikeâ€ on Facebook, does not equate to a democratically cast vote. Maybe the YouGov panel is more likely to vote than the general populace, but even so, this wouldnâ€™t be good in providing a decent sample â€“ and why should the Lib Dems and (lesserly) Labour have more of a boost? Weasel alarm.

The next is that plenty of the claimed 2010 Lib Dem voters have simply â€œsoftly and suddenly vanished awayâ€ and arenâ€™t accounted for in the current Conservative and Labour tally.

Of the weighted sample, Conservatives are down from 745 to 718 (a net fall of 27); Labour are up by a net 149 from 650 to 799 – so the Big Two are up 122 voters in this sample. The Lib Dems are down by 312 of their purported 535 General Election voters in this sample, down to 223. The net drift into the Big Two only accounts for just over a third of the Lib Dem losses. Where have the others gone? There are far too many for the minor parties to have swallowed.

Weâ€™d expect some churn from the Tories to Labour, probably made up to some extent for the blue team by gaining some right-leaning Lib Dems. Looking at the questions on cuts (good for economy/bad for economy, necessary or not, too deep/not deep enough/ just right, fair/unfair, who to blame, who to trust), there appear to be a lot of 2010 Lib Dems who arenâ€™t opposed to the Coalitionâ€™s economic stance who are simply not supporting appearing in the 2011 voting share figures.

Remember that this is a net effect. It could be that the missing voters are anti-Cameron Tories, and thereâ€™s been a greater Lib-Dem to Con drift than appears on first view. It could be that Blairite Labourites have decided to quit the field and thereâ€™s been a correspondingly larger drift from the Lib Dems. Or both. But we must also remember that the opposite will have happened to some extent – that voters dissatisfied with the Hague/Howard/IDS Tories and Blairite Labour will have returned to their ancestral homes, so thereâ€™s even more drift to account for.

So. Whatâ€™s the upshot? Itâ€™s certain that lefty Lib Dems have decamped to Labour and some righty Lib Dems to the Tories â€“ but there will have been a slight counterflow of Lab-LD and Con-LD. Some Con-Lab net drift has occurred, with fewer going the other way. Some of each party will have headed off to sit on their hands or to minor parties, but there will have been some flow back into the voting numbers. However – when all is said and done, the net drifts are:

All of the above goes quite some way to reconciling the YouGov and ICM findings on Lib Dem support â€“ the spiral of silence adjustment that proved itself so well last time is reallocating some of those â€œBoojumedâ€ Lib Dems back to Cleggâ€™s team.

If these voters have decamped to â€œDonâ€™t know/wonâ€™t sayâ€-land, can we find supporting evidence elsewhere? Our Genial Host was looking at another poll ( ICM â€“ Scotland) when I emailed him the first draft of this article.

This shows found that 40% of the 2010 Lib Dem GE vote in Scotland â€“ by far the largest component of the cohort â€“ had gone to â€œDonâ€™t knowâ€ rather than the alternative parties.

Now Scotland is likely to act a little differently to the rest of the country (maximum toxicity level for the Conservatives, for a start), but I think itâ€™s a strong corroboration, by a pollster with differing methodology and sampling.