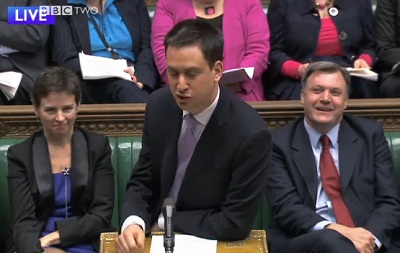 Opposition is hard. In the past month, Labour was rudely reminded of the weakness of opposition and just how difficult it will be to regain power. There are four political horseman of the apocalypse that can doom any opposition party. In March, Labour received visits from all of them. Fortunately for Labour, their visits came early, werenâ€™t fatal and the party should learn from the experience. Who are they?

Irrelevance. Opposition parties rely on the oxygen of publicity to make progress. However, sometimes the opposition is irrelevant to the big political story. Last month the Libyan crisis dominated the headlines. The political question was how well would the Coalition respond to its first big test. Labour was out of the picture. The crisis denied the opposition the chance to restart the flagging â€œYes To AVâ€ campaign. With time running out, this may prove decisive. With bombs falling, who cares about AV?

Impotence. Labour was taken aback by last weekâ€™s budget. With two popular tax cuts, George Osborne demonstrated his power to set the political debate. The chancellor was able to create headlines that distracted attention from his dire growth figures. Until that point, the hairshirt, austerity rhetoric of the Coalition had obscured this key asset. For the first time George exploited his advantage. The tables were obviously turned on Labour. After 13 years in office, it could not have been easy pill to swallow.

Introversion. To win power, Labour has to consolidate its core support and then reach out. After 13 years of New Labour, it is entirely legitimate for Ed Miliband to re-energise Labourâ€™s left wing. However, as former Blair speech writer Phillip Collins pointed out in the Times, the risk for Labour is that this proves so comfortable that the party stops there. Whilst Saturdayâ€™s march was great for morale, the party urgently needs to win back more than 2 million voters.

Labour can learn much from its encounters with these first three horsemen. Whilst it can do nothing about events, it can work on a simpler more resilient message. Labourâ€™s budget response did spot the big economic issue. The government clearly has a problem with growth. And Saturdayâ€™s march proved that Labourâ€™s core is already large and energised. The party can confidently start to look beyond its comfort zone. As for the fourth horseman? That discussion is for another day.

Jonathan is a Labour activist