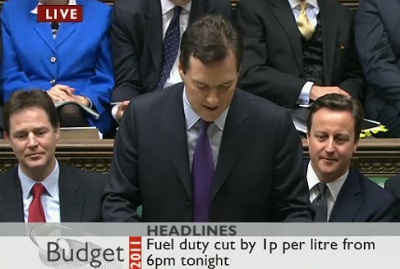 In the end almost everything that was predicted for the budget actually came about and what we saw was a package of measures designed to meet one objective – to make the the government’s cut-backs more acceptable.

Osborne focussed his big measure, the one pence cut in the price of a litre of petrol, on one of the costs that I’ve long argued is super-sensitive politically. For many the car is essential for their life-style – and when the weekly fill-up costs you Â£10 more than it did not so long ago families feel it.

His way of doing it by, effectively by getting the oil companies to pay, was classic Osborne and should generate good headlines.

A lot of the budget was on creating a climate for job creation and only time will tell where the approach was correct. The rhetoric was good though and the idea of “Start-up Britain” just as swathes of public sector jobs are going creates the right backcloth.

His insistence that the 50% tax rate is only a temporary measure will help keep key parts of his party on side. They would have liked immediate action but that was never really on.

Osborne’s acceptance of the Hutton public sector pension plan was timely and he gently teased Labour MPs with the fact that the author had been a cabinet minister under both Blair and Brown.

The big problem for the coalition, and one that EdM latched onto, was the disappointing growth performance.

We shouldn’t have to wait too long for the public reaction. The Guardian held their monthly ICM poll up for a few days so it could be all carried out after this afternoon’s statement. My guess is that the Tories will move up a notch.