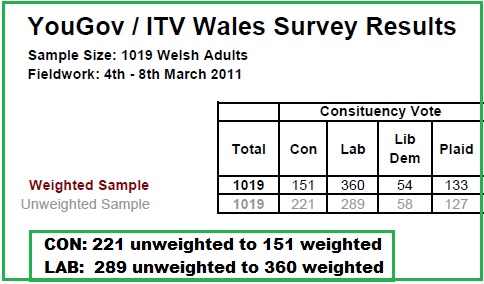 They might well be but ftom the initial detail that the pollster released I was uncomfortable by the heavy weighting uplift that Labour had in the poll and the sizeable down-scale of the Tory vote. Now with the availability today of the full weightings data we can see the reason why.

As is clear the pollster had a serious problem attracting enough red-top readers to participate with the result that those who did had their views scaled up to meet YouGov’s target weightings.

Just look at the movement for Mirror readers. They made up just 6.9% of the overall sample yet in terms of their impact on the poll findings they were “worth” 21%.

There’s is nothing wrong in heavy up-weighting like this provided that, in this case the 6.9% who participated had the same views as the 21% they were deemed to represent – it just adds to the potential for error.

Another issue is that the overall targets for newspaper readership might have become out-dated. I’ll be looking at that in a future post when I’ll be comparing YouGov’s current numbers with the 2010 National Readership Survey.

The red team is clearly going to do well in the Welsh elections but I’m less confident about the 48% projection.