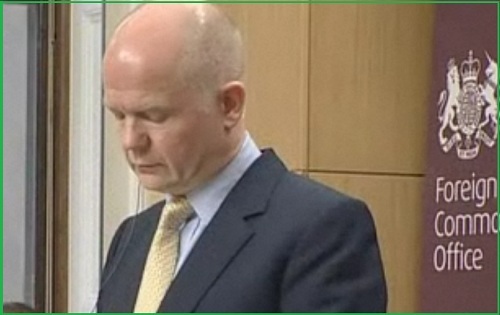 Has the foreign secretary lost his appetite for the job?

If body language and his general demeanour in public are anything to go by then William Hague looks like a man who has had enough and would like nothing more than to disappear from a high profile political role.

When pressed on his commitment at a press conference yesterday his response seemed to raise more questions than it answered. He looks nothing like the super confident William Hague of old who would take everything in his stride.

According to the Guardian’s Nicholas Watt there’s talk among some Tory MPs that “William has lost his mojo“.

Watt continues: “There is this feeling that William is not firing on all cylinders, that he is on half power,” one Tory said. Many Conservatives believe Hague has never fully recovered from his embarrassment in September when he admitted having shared a hotel room with his former special adviser, Christopher Myers.“

This lunch-time it’s PMQs and I wonder whether EdM is ruthless enough to put the boot in during his six question exchange with David Cameron. There’s nothing that Labour would like more than a top-level cabinet scalp and forcing Cameron into a position where he’s got to defend his man could be a good tactic.

Miliband, no doubt, could pick up the quotes from Ming Campbell’s Newsnight interview that he wasn’t “sure just how enthusiastic he (Hague) is about this business” – thus trying to open up issues between the coalition partners.

There has been quite lively betting on Hague being the next Cabinet minister to leave. It could be a good punt.

UPDATE 1040 Ladbrokes now make Hague the 3/1 favourite to be the next cabinet minster out. He’s moved in from 6/1.