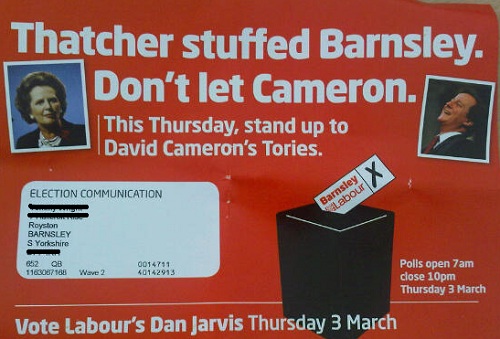 Thanks to Paul Waugh at PoliticsHome for spotting this – the latest campaign material being used by Labour ahead of tomorrow’s by-election.

A big challenge in what is a super-safe seat will be getting the vote out and it’s revealing that the party feels that the Thatcher message is the strongest card.

Even allowing for the fact that in the centre of what was the Yorkshire coalfield hostility towards the former Tory PM might be stronger than elsewhere I just wonder how long the Thatcher line is going to resonate? Isn’t this stretching it a bit too far?

After all many voters in the town were not even born when Mrs T made that memorable tearful departure from Number 10 in November 1990.

There’s going to come a time when Labour’s going to need a new idea apart from “we are not the nasty Tories” even though that has worked well for them over the decades.

Clearly Labour wants a thumping victory – but surely someone could come up with more up to date rhetoric – “the squeezed middle” perhaps?