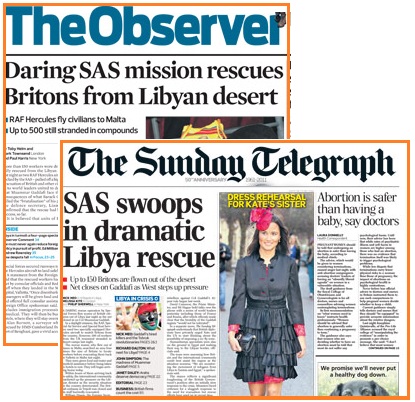 Has the SAS come to the aid of government?

So far the early headlines look pretty good for ministers with the SAS rescue in Libya capturing the imagination of several headline writers.

There’s something about the SAS that runs very deep in the British psyche and the reports that their heroism has yet again helped sort out a potentially difficult situation will be devoured eagerly at home.

After a tricky week or the government this could not have been better timed and no doubt there will be political benefits.

Tonight’s Sunday Times YouGov poll has CON 36%: LAB 44%: LD 10% – so the online pollster once again showing a Labour share that is out of line with the other firms.

Polling update: By-election survey the Mail on Sunday is carrying a poll from Survation suggesting that, as expected, Labour will romp home to a massive victory in Thursday’s Barnsley Central by-election. The shares were LAB 63%: CON 13%: UKIP 9%: LD 6%. If it were otherwise then this would be news.